A look at shale oil:
I have also looked a little more at the Eagle-Ford and Niobrara plays. My conclusion is that all of the producers are seriously exaggerating what they have, but what they have is still valuable.

In the analysis below I have concluded that the Bakken could probably be brought to 3 million barrels/day by 2020 and maybe the sum of the other shale plays could reach a similar level. (Note added 14/8/11 - As pointed out below, there probably is not enough space to drill to ever get to the necessary number of wells, so my conclusion is probably wrong, by a large amount).The USA uses about 20 Mb/d (for me M=million, but in the oil industry it is thousand and MM is million), and imports about 13 Mb/d. I expect imports to decline by 1/2 before 2020. Most of the decline could be offset by rapid development of domestic production, which is now viable due to price and technology. To get there, by my estimates, the industry would have to add about 140 horizontal rigs/year, on average, for the next 10 years. Given the MENA unrest, and the sustained high price for oil, that development now has a high likelihood of happening.

These horizontal wells, on average, seem to be 1-2 miles deep, and near 2 miles horizontal. That's 3 to 4 miles of drill pipe per well. 60,000 wells in the next 10 years could mean 200,000 miles of pipe. I don't know how much steel is in a pipe, but let's guess that 1 car equals 200 feet of pipe. That comes to about 5 million cars over 10 years, or about 4% of USA annual car production. I am surprised that it is that small. Even if I'm off by a factor of 2, we could supply all of the pipe just by building 5% fewer cars at 5% less steel per car. Given the expected increase in gasoline prices that is almost certain to happen anyway.

However the big limitation is environmental. Getting to 3Mb/d in the Bakken means drilling 30,000 producing wells by end 2020, and drilling near 5000 wells in the single year of 2020, vs about 500 in 2009. Where does the water come from, and how is the contaminated water treated for multiple frac'ing of 30,000 wells, or 5000 wells per year? Technically it's feasible, practically I'm not so sure.

See http://www.theoildrum.com/node/8258#more, (8/14/11) and especially note this contribution from Rockman

FOR ALL Another meaty story by HO...mucho thanks. I've never worked this trend so have nothing to contribute in particular about it. But I want to point out to those who don't appreciate why this is an "unconventional" play. HO's general decline curve says it all. This is not a field in the conventional sense. It is a "play". Compare to the Mother of conventional fields: Ghawar. It is still producing a significant volume after many decades. But more important: many of the original wells are still producing. They have periodically drilled new wells to enhance recovery but the main reservoirs are still prodcing. HO’s decline curve clearly shows the Bakken is a very different animal. Original Ghawar wells came on at 5,000+ bopd and held there for decades. For the most part a Bakken well’s production becomes relatively insignificant after several years compared to thir imtial rate. There is some history of success re-frac’ng such wells but seldom as valuable as the initial completion.
No doubt the Bakken, Eagle Ford and similar unconventional plays will add significantly to our reserve base. But at a cost that requires higher oil prices. But it’s still important to remember there is an end to this road also. These are not the first major fractured oil reservoirs to be developed with frac’d horizontal wells. The Austin Chalk (a “limestone” shale) had it big day in Texas. Same big initial rates, same decline rate profile, same boost to oil production, same hype. And for the most part the play is dead even at current high oil prices. And for a simple reason: almost no more drill sites left to poke. In fact the current boom in Eagle Ford drilling is a result of the decline in AC drilling: it’s one of the few oil plays left in Texas. And in time it will be fully developed just as the Bakken will. And once most of the finite number of locations is drill the oil rates will drop off a cliff.
These plays can help give us some breathing room. But they don’t change the game significantly IMHO. Would be nice if we use this crutch to give us a little more time to make adjustments to PO. But I have my doubts.
Posted by Murray at 8:27 AM No comments:

Projecting the Near Future of USA Natural Gas Availability    Feb 11, 2011
1)       A look at conventional production 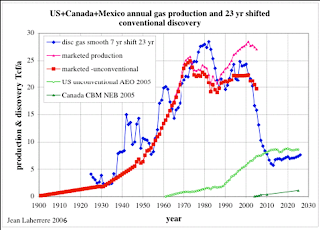 Let’s start with Jean Laherrere’s curve from 2006, which suggests that conventional NG production was about to “fall off a cliff”, which as we all know, didn’t happen. Was Jean simply wrong, or is there something more at play? A second look at discoveries vs conventional (marketed minus unconventional) shows that the area under the discovery curve is quite larger than under the conventional curve, so that there was still more to produce before the fall off as of 2006.  However, conventional production in the USA declined 4% from end 2002 to end 2006, so if the decline were to be arrested, it clearly would have required an increase in drilling. Web Hubble Telescope, in his magnum opus entitled The Oil Conundrum, has noted that oil producers will increase annual production as a % of reserves in order to keep production on a plateau when faced with a decline. It seems likely that NG producers would do the same. In fact vertical rigs for drilling conventional plays increased rapidly from 653 working rigs at mid 2002 to 1173 rigs at mid 2007. 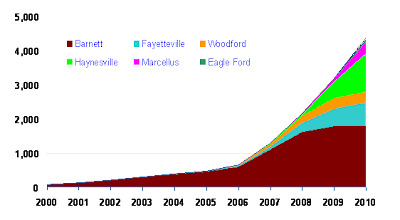 With the very large first year production, producers get a quick payback, and then, in the above curve. estimated decline flattens at a level about 3-4 times higher than the shallower plays. Haynesville should be the center of attention, so why a declining rig count?.  With no increase in working rigs it would take 6 years at the 2010 rig count to increase annual production by 1 Tcf, and would take almost 20 years for cumulative annual declines to offset new first year production, assuming the above estimate is correct.  By doubling rigs in 2011 to 340, we could increase  production vs 2010 by 0.8 Tcf/yr in 1 year, and 1.0 Tcf/yr in the second year.
However, note that  this estimate was based on only 9 months data, and only a few wells.  What if production simply falls off rapidly (as might be inferred from the "Normalized Production History")? A given well's production could go to near zero in a very short time, maybe less than 7 years. In such a case, at constant rig count, production growth stops in year 8. Doubling the rig count in 2011 would increase projected production by 1 Tcf in the 3rd year. With only 3 years experience on the earliest wells, it is not possible to make a high confidence level projection yet.
Given the time required to build rigs, train crews, negotiate leases etc., it is likely that it would take 3 to 4 years to double the 2010 rig count. Conventional production could fall by 6 to 8 Tcf/yr in that time. 2012 still looks highly problematic.


http://www.haynesvilleplay.com/
Posted by Murray at 2:59 PM No comments: